DALLAS, Texas — The North American Hockey League has announced that the 2020-21 regular season, which will be the league’s 46th season, will begin on Oct. 9. The league is committed to playing a full schedule of regular season games and the 2020-21 schedule is expected to be released by Sept. 1.

“We have spent a lot of time discussing return dates and are excited to be moving forward at this time. Our No. 1 priority remains returning to the ice this fall in the safest manner possible for everyone in our hockey community and we believe that Oct. 9 is a good date to achieve that goal,” said Mark Frankenfeld, NAHL commissioner and president. “Between now and the schedule release we will be communicating with the NHL, USA Hockey and the USHL to develop the most current return-to-play guidelines as possible.”

The NAHL will continue to work daily with teams, including the Jamestown Rebels, to monitor the situation in all 27 NAHL communities, utilizing recommendations from the Centers for Disease Control and local authorities. The NAHL and its member clubs want to ensure that they are utilizing the latest information available in order to provide the safest environment possible for all of the players, coaches, staff, billet families and fans.

“We’re sitting here right now figuring out when we’ll report,” Jamestown Rebels head coach Joe Coombs said during an interview last week. “Do we stick them in billet houses or stick them in hotels for a couple of days.” 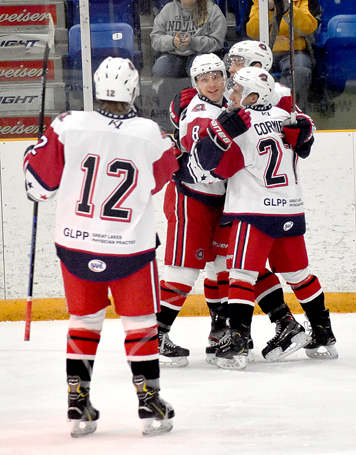 The opening event of the 2020-21 NAPHL season in Blaine, Minnesota from Sept. 17-20 will take place as scheduled.

“Our events play a big role in the development, exposure, and advancement of our players. Our goal for the upcoming 2020-21 season was to make sure that all three events could take place in the safest manner possible,” Frankenfeld said. “While we are disappointed we cannot have our NAHL Showcase during its normal time in September, we feel moving back to December gives everyone the best opportunity to attend and enjoy the event.”

On July 17, the British Columbia Hockey League — one of the top junior leagues in Canada — announced that it would be returning to play Dec. 1 pending approval from the Provincial Health Office.

“We’ve been having discussions with the Ministry of Tourism, Arts and Culture since March around a safe return to play,” BCHL Commissioner Chris Hebb said at the time. “The PHO has indicated to us that waiting until December gives us the best chance at ensuring we have an uninterrupted season, while also maximizing the amount of regular-season games we’ll be able to play.”

“The reality is that, for us to be able to operate, we need to have fans in our buildings,” said Graham Fraser, chairman of the BCHL Board of Directors. “It became clear from our discussions with the PHO that the best way to accomplish this would be to delay the start of our season to give them time to assess the effects of a potential second wave of COVID-19 during flu season.”

During his draft-day interview last week, Coombs pointed to the expected different start dates of the BCHL to the NAHL as a positive for the Rebels.

“We are betting that the Canadian border doesn’t open. Some kids will have a two-month delay going back to Canada,” he said. “Kids have decisions to make: do they want to sit out two more months or do they want to play hockey?

“Usually you have three months off and can’t wait to play again,” Coombs added. “We’ve sat five months and another two will make seven months.”

Monday’s announcement from the NAHL did not mention one way or another if games would be played even if fans were not allowed in the stands. On its website, Northwest Arena lists its seating capacity on Shults Auto Group Rink A at 2,100. For 26 home dates last season, the Rebels listed an average attendance of 442 on the NAHL website. That number was 21% of the arena’s official capacity.

Today’s breaking news and more in your inbox


The 2020 Jim Riggs Memorial Champions golf tournament has been canceled.

The decision was made recently after …

admin - October 28, 2020 0
If you are seeking information on the perfect method to buy the most inexpensive newspapers, then this report is exactly what you've...

Students Use Term Paper Writing Services For Their Own Protection